The five (classic) naked-eye planets – Mercury, Venus, Mars, Jupiter, and Saturn – are probably the most popular observing targets for amateurs. They are often the brightest objects in the sky, and as they move in their orbits around the Sun they are at times arranged in attractive groupings with each other or the Moon.

Being the innermost planet, Mercury is near the Sun, and can only be seen low in the east just before sunrise, or low in the west just after sunset. Binoculars show it as a bright star, yellowish or pale orange in colour. A telescope reveals a small disc, never larger than 12.3″ across, that, like the Moon and Venus, goes through a sequence of phases. Like the Moon, Mercury is faintest when in crescent phase and brightest when full. A 20-cm or larger telescope is usually required to see any detail on the disc, which shows vague streaks and patches like those of Mars, only much fainter. Being an inner planet, Mercury can pass directly between the Earth and the Sun, an event known as a transit. There are about 13 transits of Mercury each century; all fall within several days of May 08 and November 10. The previous transit was on 2006 November 08 and the next transit will occur on 2016 May 09.

Venus is the brightest starlike object in the night sky, and can even be seen in broad daylight with the naked eye. The best time to see it during the day is when the planet is near greatest elongation, and relatively near the Moon, which serves as a visual anchor.
Through binoculars Venus is a dazzlingly bright sight (sometimes reported as a UFO). A telescope does not show any surface features, because the planet is shrouded in heavy cloud. Like the Moon, Venus goes through a sequence of phases which can be followed with high-power binoculars or a telescope. Unlike the Moon, Venus is brightest when in crescent phase and faintest when full. Its maximum apparent angular diameter is 63.0″, which occurs when Venus is at minimum geocentric distance.
As is the case with Mercury, Venus can also transit the Sun. Such transits are among the rarest of planetary alignments. Only eight such events have occurred since the invention of the telescope, the most recent occurring in 2012. Transits of Venus are only possible during early December and early June, and recur at intervals of 8, 121.5, 8 and 105.5 years. The next pair of Venus transits occur on 2117 December 11 and 2125 December 08.

The disc of Mars – the Red Planet – is usually small, so it is best seen when at opposition. When at minimum geocentric distance, its maximum angular diameter is 25.1 arcseconds. To the naked eye, Mars has a distinct orange-red colour, which is more pronounced through binoculars. With a 5-cm telescope you should be able to see one of the white polar caps, which vary with the Martian season, while at least a 15-cm telescope is needed to see the dark markings, some of which were famously reported as “canals” by some late-19th-century observers. In general, the features observed on Mars are not topographic, but are rather superficial dust shadings. In larger telescopes, the gigantic volcano Olympus Mons can be seen as a prominent white spot. It is three times as tall as Mount Everest and is the tallest known volcano in the solar system.
The two moons of Mars, Phobos (“Fear”) and Deimos (“Dread”), are bright enough to be seen in a small tele­scope, but because they are almost hidden in the planet’s glare, a telescope of at least 20-cm aperture is needed. They are of magnitude +11.3 and +12.4 respectively, and are most easily seen when at greatest elongation from the planet.

Jupiter is one of the brightest objects in the night sky, outshone only by the Moon and Venus.
Binoculars will show the planet as a tiny, pale-yellow disc. The four brightest satellites (the Galilean moons, so-called because they were discovered by Galileo in 1610) can also be seen. A small (5-cm) telescope will show some features on the disc, usually two dark bands (called belts). With a 12-cm or larger telescope, the disc can be seen as being elliptical and displaying a wealth of detail.
Because Jupiter rotates very rapidly, one Jovian day being less than 10 hours long, details on the planet’s surface will move noticeably in a period as short as 10 minutes. These markings are storm features in Jupiter’s upper atmosphere and consist of dark brownish strips interspersed by brighter zones. The light-coloured zones are strong winds blowing in the direction of the planet’s eastward rotation, while the darker belts are winds in the opposite direction. The South Equatorial Belt (SEB), often double, varies in prominence; located within it is the Great Red Spot, a cyclonic storm that has been raging for over 300 years.
The four Galilean moons – Io, Europa, Ganymede and Callisto – are often arranged in interesting configurations as they orbit the planet.
An eclipse occurs when the satellite moves through the shadow of Jupiter, and an occultation when the satellite moves behind the planet. Satellites always disappear into occultation at the west side of Jupiter and come out from behind the planet at the east side. A satellite transits when it moves in front of Jupiter, as seen from the Earth, travelling east to west across the face of the planet. When in transit, Io, Ganymede and Europa are usually seen as bright, sharply defined spots when near Jupiter’s limb, but are darker when near the centre of the planet (Europa is then usually invisible). Callisto is dark during almost all of its transits and is often mistaken for a shadow. A shadow transit occurs when the shadow of a satellite, cast by the Sun, moves across Jupiter’s disc. The shadow may be seen through a telescope as a westward-moving small black dot on the planet’s surface.
The Galilean moons are bright enough to be seen without optical aid, but are usually masked by the glare from Jupiter. At greatest elongation, Callisto can be up to 10.7 arcminutes from Jupiter, and should be visible with the naked eye if light from the planet is blocked off, perhaps by occulting it behind a building or a tree branch.

Always brighter than magnitude +1, Saturn is readily visible to the naked eye. Binoculars show a pale yellow “star”, perhaps slightly elongated. A careful search will reveal 8th magnitude Titan, Saturn’s brightest moon and the second-largest satellite in the solar system (the largest being Jupiter’s moon Ganymede).
A small (5-cm) telescope will clearly show the famous rings as two bright elliptical bands (Rings A and B) with a thin gap (Cassini’s Division). A larger telescope is needed to see Ring C (Crepe Ring) and the gap in the middle of Ring A (the Encke Minimum).
Like Jupiter, Saturn is oval-shaped, but its surface markings are much less prominent. At minimum geocentric distance, Saturn’s disc is 20.7 arcseconds across. At opposition, it shines at magnitude +0.7 (rings are closed) or –0.2 (with the rings fully open).
Including Titan, Saturn has nine large moons. A 7.5-cm telescope will show Rhea and sometimes Iapetus (which varies in brightness because it has a large dark surface feature), while a slightly larger telescope shows Enceladus, Tethys and Dione. A 20-cm telescope is needed for Hyperion and Phoebe.

Uranus reaches magnitude +5.5 at opposition, so under dark skies can be seen with the naked eye. Easily seen as a starlike point through binoculars, a telescope reveals its greenish-blue 4-arcsecond disc. Even in large telescopes, the disc is essentially featureless. A 20-cm telescope will show the two largest moons, Titania (13.7-mag.) and Oberon (14.1-mag.).

Neptune is too faint to be seen with the naked eye, but binoculars show it readily as a dim “star”. A small telescope will show it as a bluish “star”, its tiny 2.4-arcsecond disc requiring a larger telescope (and higher magnification) to resolve. Elusive white spots may develop on the planet’s surface from time to time and may be observed with a 25-cm or larger telescope. Neptune’s brightest satellite, Triton (13.5-mag.) is visible in a 20-cm telescope.

There are five dwarf planets in our solar system: Ceres, Pluto, Haumea, Makemake, and Eris. (Or “Cows produce huge methane emissions”, if you like.) Ceres is the only dwarf planet that is bright enough to be easy to see – it ranges between 7th and 9th magnitude. The other planets are considerably fainter: Pluto at magnitude +14.2, Makemake +16.9, Haumea +17.2, and Eris +18.7. Extensive information on the visibilty of the planets is available in the Sky Guide. For observing guidelines, contact the Shallow Sky Section. 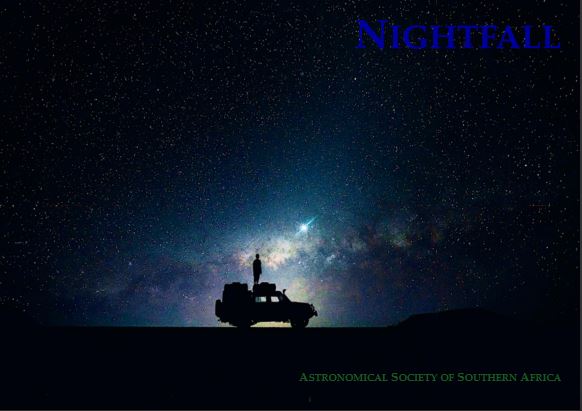